The joy of jump lists 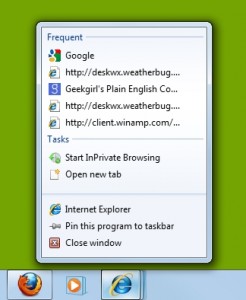 IE 8 displays its intimate relationship with Windows 7 through its smart use of the Tasks section on its jumplist.

The Recent Documents list has been a feature of Windows for many years. It provides a quick way to access the files you’ve used most recently.

In Windows 7, you’ll find Recent Documents has been tucked away out of sight and is only available by customizing the Start Menu. That’s because 7 introduces a far more useful feature called jump lists.

Jump lists are one of 7’s deceptively simple improvements. On the surface, a jump list looks like nothing more than an application-specific version of the recent documents list. Hover your mouse pointer over any program in the Start Menu that displays a small arrow to its right and a list of the files you have opened most recently using that application will slide out. Click any of those files to launch the application and open that file. You’ll find similar jump lists when you right-click any program icon in the taskbar.

This, in itself, is a big improvement on the generic recent docs list, and you can always activate Recent Documents, too, if you want a catch-all list for those times when you can’t remember the program you used to open a document. To do that:

For your most-used documents, you’ll save yourself a lot of time if you train yourself to use the taskbar and Start Menu jump lists, instead of taking the roundabout route of opening a program, then opening the document you want.

The ‘Recent’ list is the core of every jump list, but it’s only a part of what jump lists can do. If you hover your mouse over any recent item, you’ll see a pushpin. Click the pushpin to pin the item to the top of the jump list, in a section labeled ‘Pinned’ – a useful way to provide quick access to your favorite documents or media clips.

In addition, each jump list has an unlabeled ‘control’ section at the bottom with basic options such as ‘Unpin this program from taskbar’, ‘Close Window’ (if the program is currently running), and a program launch option. The latter seems redundant—after all, doesn’t clicking the program’s taskbar button launch the program?—but it’s there because with a right-click of this option you can run a program as an administrator or inspect its properties.

Winamp, with the Win7shell plug-in installed, produces this pumped up jump list.

The recent, pinned and control sections of jump lists are all useful, but the real fun starts when you encounter a customized jump list. Microsoft has put jump lists under the control of developers, who can add their own bits and bobs to the core jump list features.

Several Microsoft Windows 7 apps, including Internet Explorer 8 and Windows Media Player, sport such customized jump lists. Each of these adds a ‘Tasks’ section to the jump list.

IE8’s task section lets you open a new browser tab directly from the jump list or start an InPrivate browsing session. (InPrivate browsing hides your browsing traces by discarding all cookies, history and other browsing data at the end of each session.) The task list in Windows Media Player lets you resume playing the previous playlist or “play all music”—not necessarily the most useful options.

Microsoft’s not the only one creating customized jump lists. You can expect jump lists to show up all over the place and you’ll find them either in current or soon-to-be-released versions of Google Chrome, Firefox, WinZip, iTunes and a host of other apps.

One of the most impressive early efforts is Win7shell (also known as Windows 7 Taskbar Integration), a plug-in for the freeware Winamp media player. Win7shell divides the Winamp jump list into seven sections, from top down: Pinned, Recent, Frequent, Bookmarks, Playlists, Tasks and Controls. The task list lets you open Winamp’s preferences and go to the beginning of a track, among other options. You select what’s displayed by configuring the plug-in. To do so, right-click Winamp’s taskbar icon and click Winamp Preferences -> Plug-ins -> General Purpose -> Win7shell -> Configure selected plug-in. The plug-in is updated frequently, so get the latest version.

In fact, if you don’t have Winamp, it’s almost worth installing it together with Win7shell as a lesson in just what can be done with the Windows 7 taskbar. In addition to the jump list tricks, Win7shell displays media player controls and album artwork when you hover the mouse pointer over Winamp’s taskbar icon. It also colors the icon: red for stopped; yellow for paused; and progressively green to indicate how much of the current track has been played. Winamp is a free download.