When you refer to a cell in an Excel formula, you can use any of three different ways of referring to that cell, known as relative, absolute and mixed references.

You denote a relative reference simply by using the cell’s column letter followed by its row number: A1. A simple formula that uses relative cell references to add the numbers in cells B1 through B9 is:

If you place this formula in cell B10 and then copy it across from B10 to C10, Excel makes the sensible assumption that you want to total the values in the same relative positions in column C – that is, cells C1 to C9 – and so it automatically adjusts the formula to read:

An absolute reference refers to a cell in a fixed location. Such references come in handy when you want to refer consistently to the same cell, or range of cells, throughout a worksheet.

You can make life easier for yourself by naming a cell or range of cells. This is particularly handy when you want to refer to a certain cell repeatedly in formulas. When you name a cell, Excel automatically makes it an absolute reference.

For example, to name our mileage rate cell in Excel 2007:

Once you’ve named the cell, you can use its name in any formula, thus:

As you define the name, notice the value in the Refers To box. You’ll see the full absolute reference consists of the worksheet name followed by an exclamation mark and the absolute cell reference, for example:

That means you can use the named reference – in our case, MileageRate – in any worksheet in your workbook, not just the current worksheet.

Specifying the scope of a name 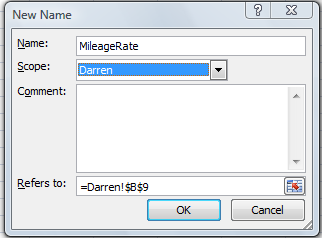 That’s great, but what if you’ve set your workbook up with a separate worksheet for each employee and each of those employees has a different mileage rate? In that case, you won’t want a reference to MileageRate on Mildred’s worksheet grabbing the value from Darren’s worksheet.

In Excel 2003, you deal with this situation by specifying the worksheet when defining a name: in the Name box, first type the current worksheet’s name, followed by an exclamation mark, followed by your chosen cell name. For example:

Excel 2007, makes this easier by including a Scope box in the New Name dialog: when you define the name, select the current worksheet from the drop-down Scope box to restrict the reference to the current sheet, and Excel will name it appropriately.

If you ever need to delete a cell/range name, in Excel 2003:

When would you need such a reference? One case is when you create any table where the values are derived by multiplying the x axis by the y axis. A multiplication table is the simplest example of this. 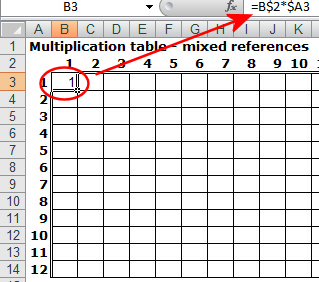 The easiest way to get a feel for mixed references is to give them a try: 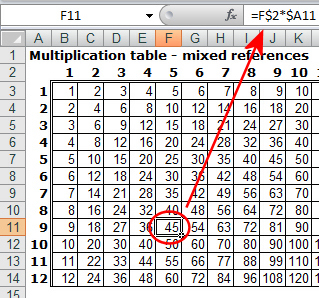 If you find you’ve used the wrong type of reference in a formula, Excel offers a shortcut for changing the reference:

A memory jogger to help you remember to use the F4 key for changing references is to take a look at your keyboard: notice how the $ symbol, used to denote absolute references, is above the number 4. Use it as a reminder (a trick I learnt from a Kiwi school teacher).