What to expect from Windows 7

There’s a theory that Microsoft gets it right with every other version of Windows. Those who subscribe to this school of thought give Windows 95, Windows 98 Second Edition and Windows XP the plaudits; Windows 98, Windows Me and Windows Vista are relegated to the better-luck-next-time bin.

If you think there’s something to this theory, it should come as no surprise that Windows 7 is, indeed, a winner.

Better than your old Windows 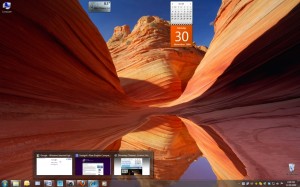 A revamped taskbar, sidebar-less gadgets, program previews and a beautiful collection of desktop themes on a Windows 7 desktop.

So what’s Windows 7 like? In many ways, it’s a svelte, smart, swift Vista. Microsoft has taken on board all the criticism heaped on Vista and made sensible changes. If you’ve used both Windows XP and Vista, you’ll find Windows 7 is very like Vista but with a Windows XP feel to it.

That XP-ish feeling has a lot to do with maturity. After all, XP wasn’t a huge hit when it first appeared on our desktops, but over time and with the addition of various service pack releases it became a reliable, compatible, solid operating system that served people well. Windows 7, which is essentially Vista 2.0 carefully disguised by name, has that sort of maturity.

So, if you’re currently using Vista, don’t expect to find many radical changes, but do expect a host of welcome improvements. You’ll find that the time you invested in learning how to use Vista will stand you in good stead when you make the shift to the new operating system.

If you’re using Windows XP now, the move to Windows 7 will be quite dramatic and, on the whole, decidedly pleasant. Windows 7 makes XP look like the outdated operating system it is. Win 7 gives you better security, multimedia savvy, graphical allure and self-healing properties.

One of the welcome improvements in Windows 7 is that it has very modest hardware requirements, unlike the lumbering Vista. It should run without problems on any system currently running Vista and it’s quite possible that your old XP-based PC can also handle Windows 7. It will even run on a netbook.

Windows 7 is loaded with new features, some subtle and some striking.

The most obvious change is probably the complete reworking of the taskbar. That strip along the bottom of the Windows desktop has undergone minor changes over the years, but nothing like the Win 7 revamp. The Quick Launch bar is gone, the notification area has been curbed, and program buttons have been banished. Taking the place of the Quick Launch bar and the space-hogging program buttons are small application icons. There’s an icon for each running program—only one icon no matter how many documents or windows you open within that program—plus icons for any oft-used programs you pin to the taskbar.

Internet Explorer 8 displays previews of each tab open within the browser.

With all these similarly-sized icons, how can you tell whether a program is running or merely pinned to the taskbar? Well, although there is a subtle box around running program icons and programs that open multiple windows have a stacked effect on their icons, the real answer is, “Don’t bother.” Microsoft has deliberately blurred the distinction between running and non-running programs because most of the time it’s irrelevant. That’s especially the case on modern computers with plenty of RAM (random access memory) in order to run programs concurrently. It’s part of Windows 7’s sleeker, simpler approach. This is one of those changes you may well loathe at first, but there’s a good chance you’ll come to love it. (If not, we’ll show you how to get the old Quick Launch feature back.)

If you move your mouse pointer over the taskbar icon of a running program, you’ll see a small preview of each of its open windows; hover over any of those previews and all other windows will become transparent (this is called ‘peek’); click any of the previews to bring that window into full view. Programs that are Windows 7-savvy do even more than this. For example, Internet Explorer 8 provides a preview of every tab you have open within its single browser window, so with a click you can bring a particular web site into focus.

You no longer have to unlock the taskbar to change the order of icons on it: simply click and drag to move an icon, and right-click an icon and choose Pin To Taskbar to give it permanent residency status in the taskbar.

At the extreme right-hand end of the taskbar is an almost invisible button. Click it and all open windows will become transparent, giving you a clear look at your desktop (‘desktop peek’).

The end result of all this tinkering is a cleaner, more consistent, more functional taskbar.


The transparency act is not the only smart windowing trick in Windows 7’s toolkit. Here’s a taste of some of the other new twists on arranging windows:

Windows 7 introduces the concept of libraries, centralized views of specific types of files. A library isn’t a folder in itself; instead, it provides a single location for viewing, say, all your music files, no matter where those files are stored. Windows 7 automatically adds your Personal Music folder and the Public Music folder to the Music Library, and you can easily add other locations. In similar fashion, you can view your videos, pictures and documents from separate libraries.

You can also create custom libraries. For example, you could have a library containing all files relating to a birthday celebration: the photos, the music, an invitation list and shopping list, and so on. Those files may be stored in any number of folders, with the library providing a united view. 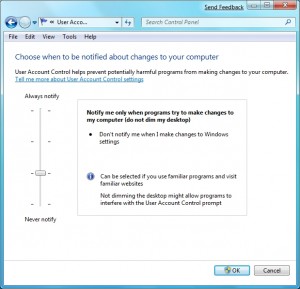 A slider lets you adjust how protective User Account Control is.


There’s a lot more to Windows 7. Homegroups provide simpler file sharing for home networks consisting of computers running Windows 7. Jumplists add program-sensitive shortcuts to items in the main Start panel and to program buttons in the taskbar. And, to the delight of many a frustrated Vista user, User Account Control has been reined in and the Sidebar cast aside in favor of on-the-desktop gadgets.

Vista disappointed many people at least partly because it raised such high expectations and then failed to meet them. Windows 7 takes the opposite approach: it promises small but useful changes and it delivers those and more.