Geekgirl’s take on the iPhone 4 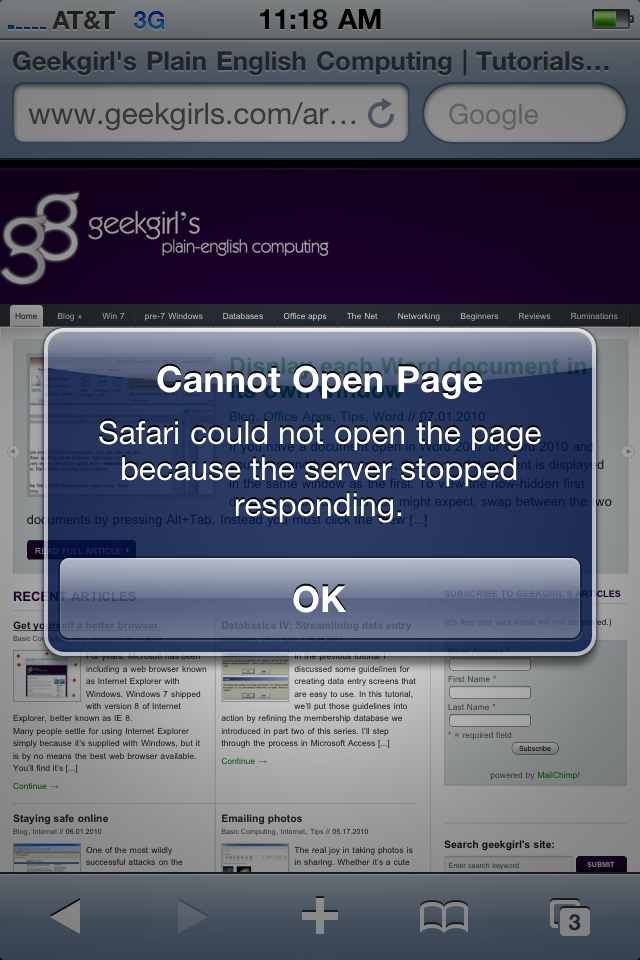 It’s not the server’s fault, it’s the dreaded antenna problem in action.

With the iPhone 4, Apple comes oh so close to producing a truly drool-worthy smartphone. Take all that’s great about the iPhone 3GS—the slick styling, the unmatched ease-of-use of the touch interface, the App Store treasure trove. Kick it all up a notch and you have the iPhone 4.

The new phone gets full marks for elegance. It replaces the rounded edges of its predecessor with straighter sides and a trimmer profile. The slight reduction in width makes it more comfortable to hold for those with smaller hands. Front and back, the phone is encased in glossy aluminosilicate glass, touted to be ultra-durable. Running all the way around the rim is a stainless steel band housing the phone’s antennas. Those antennas boost the phone’s base signal reception, but…well, more on the antennas later.

Apple has doubled up on the phone’s cameras, adding a VGA-quality camera on the front and beefing up the back camera to 5 megapixels. A surprisingly effective LED flash can be used both for stills and when you’re taking video in HD with the back camera, while having two cameras is particularly handy when you use FaceTime, Apple’s take on video phone calls. FaceTime is decidedly slick in action, but as it currently requires iPhone 4s and a wi-fi connection on both ends, its usefulness is limited.

The ‘retina’ display itself is drop-dead gorgeous. Cramming 326 pixels per inch into a 960-by-640 pixel screen produces a crispness you’ll spot immediately. Apple has also improved the iPhone’s audio quality—something desperately needed—by adding a second microphone and using dual-mic background noise suppression. You’ll really notice the difference on FaceTime calls, but the improvement in quality for regular calls is still not enough to make this one of the phone’s strong points.

Powering the phone is Apple’s A4 processor, the same processor you’ll find in the iPad. It’s zippy and provides a noticeable performance boost both when launching apps and in the satisfying responsiveness of the touch interface. Earlier iPhones feel sluggish in comparison. Round it out with a small-but-significant bump in battery life, a three-axis gyroscope, which opens up new opportunities for motion-controlled apps, and roomy 16GB and 32GB memory options and the hardware looks pretty good.

And then there are those antennas, so neatly and so fatally housed in the metal band. I could easily reproduce the signal-loss problems which have been widely reported. With a strong initial signal, the signal drop didn’t cause any difficulties; but in locations with poorer reception, holding the phone oh-so-naturally for a left-hander caused dropped calls and regular freezes in data downloads. Encasing the phone in any type of cover eliminated the problem completely.

So there you have it: A beautifully elegant, invitingly equipped phone with a nasty defect. If you plan to encase your phone, then the signal issue goes away. But it’s hard for me to recommend a product which is demonstrably flawed; and not merely flawed, but flawed in a way which affects its central purpose.

Bottom line: All that beautiful work undermined by a signal flaw.