Preparing for your inevitable computer disaster

If you’ve been computing for any length of time, you’ve probably experienced that frisson of panic when you realise your data is gone—perhaps you overwrite a file or maybe your hard drive dies. If your data is well and truly gone and no amount of tinkering or workarounds can resurrect it, your only hope is to have a recent backup.

Backing up your data is preparation for the blow that will strike. With a recent backup in hand, even a distressing event such as a hard disk failure may prove to be no more than a blip in your routine.

Windows 7 comes with an impressive array of backup tools. It not only lets you back up files and folders, it also gives you the power to restore previous versions of files, roll back your system to an earlier state, and create a backup of your entire PC—operating system, applications, settings, documents and all. You can perform backups manually or, if you’re smart, set the system on auto-pilot and have Windows do the work for you.

It’s defence in depth: if one backup solution doesn’t rescue you from your predicament—whatever that may be—another one probably will.

Note: Although this article focuses on tools available in Windows 7, many of the basic practices and techniques apply to earlier versions of Windows and, in fact, to any computer system, be it Windows, Mac or Linux. If you’re using Windows Vista, you’ll find most of these tools are available to you although in some different form.

The first line of defence 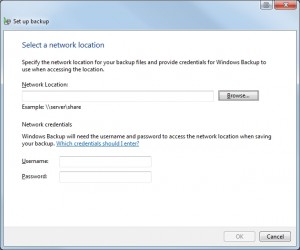 If you’re using the Professional or Ultimate editions of Windows 7, you can perform backups to network drives.

Creating backups of your files is your first line of defence. It protects you on those occasions when a file becomes corrupted, when you accidentally delete or—usually worse—overwrite a file, or when you simply need to clear space on your working drive.

Windows 7 centralises most of its backup functions in the Backup and Restore Center and it’s there you’ll find the File Backup program. You’ll also find options to create a system image, to create a system repair disc, and to restore files from a previously created backup.

To perform the initial file backup, follow the steps detailed below in the step-by-step Creating a Backup. Once you’ve run one backup, Windows will automatically use the same settings to run future backups, or you can alter the settings via the same dialog box.

Unlike Vista, all versions of Windows 7 include the complete backup and restore options. However, if you wish to back up to a hard drive on a network, you’ll need to be running the Professional or Ultimate versions. You can’t back up across a network using Windows 7 Home Premium.

Tip: Back up externally

The best investment you can make to ensure the safety of your data is to buy an external hard drive. These drives are inexpensive, they provide plenty of room for multiple backups, and they are portable, making them safer, more secure and usable on more than one machine. Note that many of these drives also include their own backup software, which you may decide to use instead of Windows built-in backup program if you like. 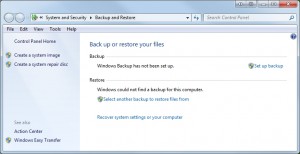 The first time you use the Backup and Restore Center, you’ll need to configure the backup program. If you’re backing up your system to an external hard drive—by far the most efficient method—you should first plug in your drive, make sure it’s recognised by your system, and then follow these steps:

The second line of defence

Between the extremes of losing a file and having your hard disk fail completely, there are a variety of medium-scale setbacks you may encounter. Two other Windows 7 tools, called Previous Versions and System Restore, come to your aid on these occasions.

Previous Versions lets you recover an earlier version of a file, invaluable when your latest editing attempt has caused more harm than good, or when you want to compare an original with the current version.

To revert a file to a previous version:

If you want to keep both the current version of a file and recover a previous version, instead of clicking Restore in step 3, click Copy and select a location for the recovered file.

You can also right-click a folder and select Previous Versions from the pop-up menu to see a list of all files within that folder for which previous versions are available. 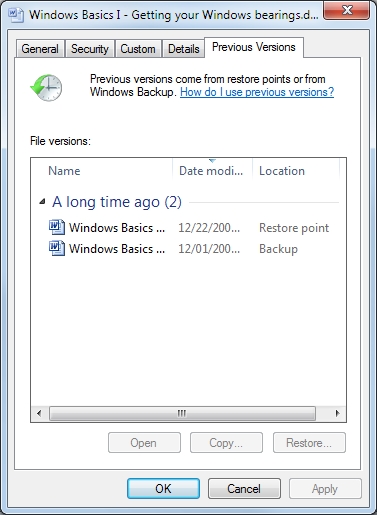 Previous Versions works hand in hand with System Restore, so make sure you have System Restore enabled—the default setting—to take advantage of this feature. Each time System Restore creates a snapshot of your system, known as a restore point, it creates shadow copies of your changed files.

If you take a look at the list of previous versions available in a file’s Properties dialog box, you’ll see under Location that some are labelled ‘Restore Point’ and others ‘Backup’. Because Windows 7 automatically creates a system restore point each day, you’re likely to have more of the former than the latter. When you restore a file from a shadow copy, unlike a backup you do not need to have the backup disk available, because shadow copies are stored on the same drive as the original. So ensuring that System Restore is turned on is your best guarantee of being able to recover the version you want.

Tip: Backing up to a second internal drive

If you let Windows choose which files to back up, it will not back up any files stored on the drive on which you’re creating the backup. So if you have a second hard drive installed in your computer and you keep your documents stored on that drive, don’t try to create your backup on that drive.

The third line of defence

Sometimes things go south in a big way. You load your system to the gills with new software and everything gets out of whack. You suffer a spyware infestation. Your hard drive fails. A disk controller goes berserk and scrambles the file system.

When your system is a shambles, a system image can save your files and your sanity.

A system image is an exact copy of your system drive, including the operating system itself; all installed applications, utilities, and drivers; all settings; and—provided your documents are stored on your system drive—all your data files as well. When disaster strikes, you can restore your computer from this image and return it to its pre-catastrophe state in short order.

You should use a system image in conjunction with making regular file backups. This two-pronged approach is important for three reasons:

Windows 7 automatically creates a system image when it backs up your files if you let it choose what to back up and if you have enough room on your backup drive.

To get the most benefit from having a system image, however, you should create an image when you first get your computer set up, so you have a completely clean, problem-free image of your system. First make sure you have installed your regularly used programs, downloaded and installed any updates, and adjusted Windows’ settings to suit your needs. Then perform the image backup. If possible, put this pristine image on a separate drive so it doesn’t get overwritten by later backups and is always available. You’ll then be able to return your computer to an “as new” state if disaster strikes.

If your system becomes completely unusable and you can no longer access Windows, you can restore it using a system image. You’ll need to use Windows 7’s System Recovery Options, accessible either by booting your computer from a Windows 7 setup disc or a system repair disc, or by rebooting and pressing F8 during the initial boot sequence before Windows loads.

To restore using your Windows 7 setup disc or a system repair disc:

In the absence of a Windows 7 installation disc or a system repair disc, try this:

There’s nothing more frustrating than having a backup and then finding you can’t use it during an emergency. Make sure when you create a backup, that you run a trial restore. For a file backup, use the Restore Files button in the Backup and Restore Center and try extracting a file or two from the backup set. To test a complete system image restore, follow through all the steps to ensure your system can recognize the backup, but do not click Finish unless you really do want to replace your existing system.

Backups from another PC