It’s easier to change filenames in Vista and Windows 7 than in previous versions of Windows. All you do is:

It’s a small change from the previous method, where you had to manually select the filename before editing, but it saves a lot of time.

To change a whole batch of files at once:

Each of the files will be renamed, with sequential numbering used to distinguish one file from another.

So, for example, if you select three .jpg image files and rename the first one Dad’s Birthday, you’ll end up with files named

Unfortunately, this new file renaming method has one drawback: although the new method makes changing filenames easy, it makes it harder to change the file extension. The problem is exacerbated by Microsoft’s determination to hide those file extensions from view.

Microsoft has been hiding file extensions from users in version after version of Windows. This supposedly makes things less confusing; in fact, it’s a piece of paternalistic boneheadedness. Being able to see file extensions is a good thing.

Really, that’s it. Microsoft may think it makes for less confusion, but the reverse is true.

It’s pretty clear by now that Microsoft is unlikely to see the light and display file extensions by default in any version of Windows. That doesn’t matter because you can take charge of the situation yourself and turn extension display on:

Why change a file extension?

If Windows uses a file’s extension to determine how to open that file, why would you ever want to change an extension? Wouldn’t that simply confuse Windows and prevent it from opening the file?

In many cases, that’s true. Most of the time, you’ll want to leave extensions alone. But there are times when it’s useful to be able to change those extensions. If you use a text editor to create a web page, you may want to keep the .txt extension while editing the code but then change the extension to .html to be able to view the page in a web browser.

Occasionally, you may receive a file which has the wrong extension: a .jpg image which someone has accidentally named as a .bmp file, for example. If you try to load a .jpg file into your graphics program and you get an “invalid file format” or similar message, try changing the extension to .bmp or .png or .tif or another common graphics file extension, and see if your graphics editor recognises it.

You may also want to change the case of an extension. Many cameras save image files with a capitalised extension, such as .JPG. Windows is case-blind when it comes to filenames, so it doesn’t matter to the operating system whether a file is called MAGNOLIA.JPG or magnolia.jpg, but it may matter to humans; after all, using ALL CAPS is the digital equivalent of shouting at someone, and a folder littered with .JPG images does just that.

How to change a file extension

It sounds simple enough, but it turns out to be pretty clumsy, especially if you’re changing extensions on a bunch of files.

Things get even worse if you want to change capitalised extensions on a group of files: Windows 7 refuses to do it. For example, if you have three files named 1.JPG, 2.JPG and 3.JPG, if you select all the files and rename the first one platypus.jpg, you’ll end up with platypus (1).JPG, platypus (2).JPG and platypus (3).JPG. The extension pigheadedly maintains its uppercase lettering. If you want to change those extensions, you have to rename each file one by one. 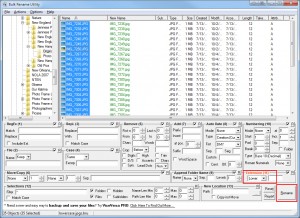 A better way to change filenames and extensions

If you need to do some serious file renaming – perhaps you  have folders stuffed with horribly named photos – try a bulk file renaming utility. There’s one called Bulk Rename Utility that’s free to use. It looks pretty ferocious when you open it up, but don’t worry – although it has enormous power and flexibility, it makes very light work out of actions such as changing the case of a bunch of file extensions. If you want a less intimidating renamer, Better File Rename does the trick, but it’ll set you back $US19.95.

Here’s how you change the case of all files in a folder using Bulk Rename Utility:

A quick look at Bulk Rename’s other options gives you an idea of the power of the program. You can even save renaming schemes so that you can reapply them to other batches of files.