Note: I’m working on updating this series of articles. This article is really showing its age. All the examples are for  Microsoft Access 2000/2003, and things have changed a lot since then. While the concepts are still the same and you can learn a lot from those, the step-by-steps are quite different if you’re working with a newer database program such as Access 2007 or 2010. I plan to produce a new article with Access 2010 examples in the next month or so, so if you’re interested, check back in a while.

In the previous tutorial we used Query By Example (QBE) on a database of countries to answer questions such as ‘Which countries are members of the UN Security Council?’ and ‘Which countries have a population over 20 million and an area over 2 million square kilometres?’ These are simple queries which we created using QBE and basic operators such as > (greater than).

It’s possible to ask more complex questions, such as:

The way you tackle these queries depends on which database program you use. I’ll be using Microsoft Access in the examples, as it has querying tools that leave most other PC databases in the shade. You can download a sample copy of the database to try this out for yourself.

The simple queries we explored last time did nothing more than find a matching value (Name=Namibia), or compare a value in a field to a constant (Population<=20000000).

We can take this a step further and run queries that will compare one piece of data against the rest of the data in the table. These are real bread-and-butter queries. For instance, in a sales database, you might want the answers to questions such as: Which region had the lowest sales for the quarter? Who are our five best salespeople? Which salespeople performed better this quarter than last?

To ask these types of questions, you need to use something a little more sophisticated than QBE. In Access, you use the Query Designer.

Let’s start with the question, Which country joined the UN most recently? Here’s how to get the answer:

In fact, if you run this query on the updated version of the Countries database I now have online, you’ll find the answer is not Tuvalu, but South Sudan. East Timor, Switzerland, Montenegro and South Sudan have all joined the United Nations since I first wrote this article. While I’ve left the article text the same, I have updated the database to reflect these recent additions to the United Nations family (I haven’t had a chance to update the population figures, alas).

These changes show how useful database queries can be: Provided the data in your database is accurate and up to date, you can use a query you created years ago on your current data and get an accurate and up-to-date result.

Click the Close box on the Query window. You’ll be asked whether you want to save the query. Click Yes, name the query Most Recent Member and click OK.

Why should you save a query? After all, you already know the answer to your question is Tuvalu. But then, the answer won’t always be Tuvalu. Say Switzerland decides to join the UN this year, or a new country emerges from one of the bubbling spots on the globe and becomes a new member? (See the Geopolitical Update above.)

By saving the query, you can re-run it at any time and find the up-to-date answer to your question. This may seem a fairly trivial operation with our simple example, but when you’re creating complex queries or, more importantly, when your data changes regularly, saved queries eliminate a lot of work.

To use your saved query, simply double-click it in the Queries list.

The Most Recent Member query you created is called a Select query. Access lets you create five different types of query:

Select queries. Used to retrieve data from one or more tables and display the results in a datasheet, which you can save or modify. You can also use Select queries to group records and calculate sums, averages and so on.

Parameter queries. For creating on-the-fly queries which prompt the user for criteria at the time the query is run. For example, you can create a parameter query that answers the question: Which countries have a population greater than X and less than Y? Each time you run the query, it will prompt you for the values of X and Y. Thus you can use the same query repeatedly to discover different information.

Crosstab queries. Used to summarise data from one field and group it in tabular fashion according to two criteria.

Action queries. Queries that make changes to the records in a table. There are four type of action queries: Delete queries remove records from a table; Update queries make global changes to a group of records in a table; Append queries add records from one or more tables to the end or one or more tables; Make-table queries create a new table from all or part of the data in an existing table.

SQL queries. A query created using SQL, which is a highly advanced querying language. SQL queries give you enormous flexibility, but require a high degree of expertise to use effectively.

Let’s quickly run through a second select query, answering the question: Which countries are in the top 5% in terms of area?

How about the question: Which five countries have the lowest population density? We don’t have a Population Density field in our table, so how can we calculate it?

We do it by creating a new field which becomes part of our results (note, though, that the field does not become part of the existing table structure). Here’s how:

and press Enter. We’re creating a new column (PopDensity) whose values will be calculated by dividing each country’s population by its area. By the way, if you can’t see the entire contents of this column, drag the right-hand edge of the column header to the right to resize it.

The results show the names, population and population density for the world’s least populated countries. 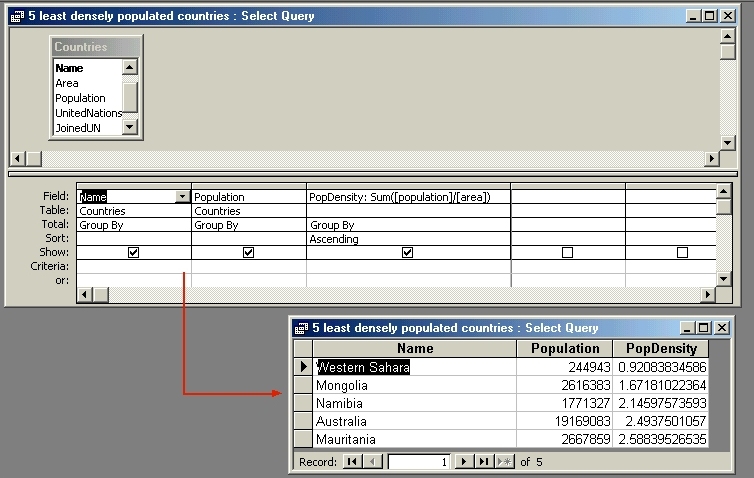 This Select query in Access finds the five most sparsely populated countries in the world using a calculated field, PopDen

Let’s finish up by converting that last query into an action query. This query doesn’t merely provide us with the results; it saves them in a new table which includes a PopDensity field in its structure. The original table remains intact and unchanged; it’s the new results table which has the extended structure.