Note: I’m working on updating this series of articles. This article is really showing its age. All the examples are for  Microsoft Access 2000/2003, and things have changed a lot since then. While the concepts are still the same and you can learn a lot from those, the step-by-steps are quite different if you’re working with a newer database program such as Access 2007 or 2010. I plan to produce a new article with Access 2010 examples in the next month or so, so if you’re interested, check back in a while.

If the title of this tutorial sounds a little intimidating, never fear. Toss the term ‘parameter query’ around at a party and you may get a few gasps of admiration, but understanding and using this highly useful type of query is no big deal.

If you think of the queries we’ve examined in earlier articles in this series, while the data may change, the query itself is static:

With parameter queries, both the data and the queries may change over time:

You obtain the values for those variables – x, y and n – by asking the user to supply them each time the query is run.

Let’s take a look at some parameter queries in action, using Microsoft Access, which provides tools that let us do this job easily. We’ll use the Countries database we’ve used previously (you’ll find a download link at the bottom of this page) and start by creating a non-parameter query to answer the question “Which countries have a population greater than one hundred million?” We’ll then transform that query into a parameter query and contrast the results.

in the Criteria row.

>[Show countries with a population over:]

You may need to resize the column (by dragging the right edge of the column header to the right) so you can see the entire contents.

Neat, huh? Let’s examine the query to see how we did this.

The criteria consists of the greater than operator (>) followed by the prompt we wish to use enclosed in square brackets:

>[Show countries with a population over:]

That’s simple enough, but there are two important things to keep in mind when you create your parameter prompts. First, be succinct. Access lops the prompt off at 37 characters, so if you are verbose you’ll end up with shabby-looking, truncated prompts.

Second, be as clear as possible. Although you want to be succinct, don’t become cryptic. For instance, you could just as easily use the criteria:

Those will work, but if someone else tries to use your database or you use the query only occasionally, a more informative prompt will avoid confusion and ensure the correct input.

Your parameter queries are not restricted to a single prompt. You can use them to find a range of values or obtain multiple criteria.

Here’s a query which answers the question, “Which countries have a population between x and y?” by prompting for a lower and an upper value:

1. If you still have the results of the Population over X query open, click the View button to return to Design View. If you closed the query after saving it, highlight it in the Queries list and click Design to open it in Design View.

2. In the Criteria cell of the Population column, add:

AND <[and a population under:]

The full criterion should now read:

3. Run the query and you’ll be prompted twice. Enter a lower limit in the first dialog and an upper limit in the second, then click OK to see the results.

4. From the File Menu choose Save As and name the query Population Range. By saving the query, you’ll be able to run it repeatedly, supplying different values each time.

This range query is similar to queries we’ve explored before, using two comparison operators (> and <) and the logical operator AND, but instead of using constant values, it substitutes two parameters obtained via dialogs.

Let’s try one more range parameter query, this time using dates. This one will answer questions such as “Which countries joined the United Nations in the nth decade of 2000?”

As well as matching a range of values in a single field, you can use parameter queries to match values in more than one field.

Let’s modify the Date Range query to let us not only specify a date range, but also limit the answer to countries over a certain population.

>[and has a population over:]

You’ll be presented with three prompts, asking for lower and upper dates and then a lower population limit. Note that this query in essence uses the AND logical operator to extend the query, so it’s the equivalent of: Show me countries that joined the UN between date x AND date y AND which have a population over n. 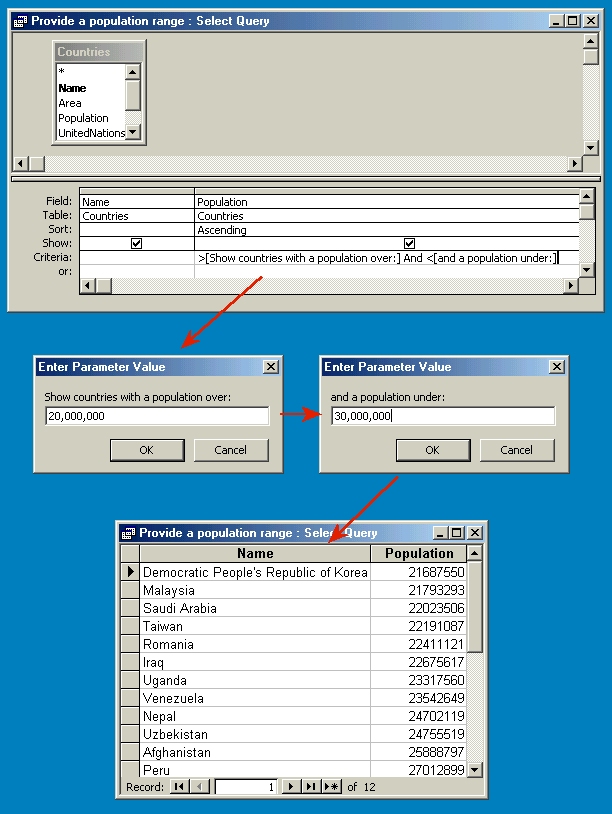 Running a parameter query: A parameter query prompts the user for one or more criteria. In this example, the user specifies a population range and the query returns all matching records.

Try experimenting with parameter queries on your own. You’ll find they add enormous flexibility to the types of information you can wheedle out of your database. A tourist bureau, for example, can use them to provide information to the public on local events occurring this week. A small business can find all those customers who placed orders over a specific amount in the previous quarter. You’re sure to come up with instances where you can use them with your own data.

The only drawback with these queries is that you can end up peppering your users with endless, rather unattractive prompt boxes as you try to collect all the necessary parameters.

There’s good news. With a little fast footwork, you can avoid these dialogs and replace them with a single, good-looking dialog of your own design. I’ll show you how in the next article in this series.