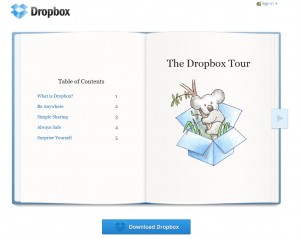 Dropbox takes all the pain—and most of the brain—out of sharing files. It lets you synchronize files across all your computers at home, at work and on the road; pool files for collaboration with workmates, family or friends; create online photo galleries in an instant; and share any single file—minuscule or gargantuan—simply by sharing a URL.

Dropbox consists of a small program and two gigs of web-based storage, with more space available if you pay.

To get started with Dropbox:

Dropbox creates a backup of your files and folders online so you can access them via a browser from anywhere in the world.

As soon as you add another computer to Dropbox, the files you placed in My Dropbox on your first computer will start appearing on the second computer. A copy of each file in your Dropbox is also stored online—encrypted and protected by your ID and password—so you get an instant backup of those files. You’ll also be able to access them from any computer with an Internet connection. Dropbox lets you synchronize any number of computers, so repeat this process until all your computers are set up.

Dropbox is smart about the way it copies files. If you modify a file on one computer, only the changes are synced to your other computers, saving on bandwidth and making for surprisingly swift updates. If you’re working on a computer which is not currently connected to the Internet, as soon as you go online its Dropbox files will be updated. Similarly, if a sync is interrupted, Dropbox will resume from where it left off when you reconnect. You can also adjust Dropbox’s bandwidth usage (right-click the Dropbox icon in the taskbar notification area and click Preferences -> Bandwidth) if you want to throttle it back.

If you want to sync some but not all of your files between your computers, use Selective Sync:

Dropbox keeps track of older versions of your documents for 30 days, allowing you to resurrect them if needed. You can remove the 30-day limitation by buying the Packrat add-on or by upgrading to a paid account.

Dropbox offers several ways to share files with others.

To share a single file with others, drag it into the pre-configured Public folder within My Dropbox. Any file you place in the Public folder is automatically assigned a URL (web address). Right-click the file and select Dropbox -> Copy Public Link to copy the URL to the clipboard. You can then paste that link into an email, a text message or a browser and the recipient will be able to view or download that file—and only that file—from your online Dropbox.

Dropbox also lets you share the contents of an entire folder with other people. This is perfect for collaborating with others or as a simple way to share files with far-flung friends and family. To share a folder you’ve placed in My Dropbox:

When someone accepts your invitation and installs Dropbox, the folder you’ve shared will automatically appear in their Dropbox. Any change either of you makes to the contents of that folder will be synchronized between your computers.

One final way of sharing files is to drag a folder full of photos into My Dropbox. When you do so, Dropbox instantly creates an online photo album with the folder’s name. You can share this album with others by sharing its URL.

Dropbox on your idevice

Because of Dropbox’s popularity, hundreds of other software and web service developers have integrated it into their products. Nowhere is this more evident than on the iPhone and iPad, where dozens upon dozens of apps use Dropbox sync to beef up their features.

The iPhone and the iPad are both remarkably accomplished little computers, with one serious flaw: they’re woeful when it comes to file management. So what do you do if you want to share files between your computer and iPhone or iPad? There are a number of options, but Dropbox is by far the most efficient. 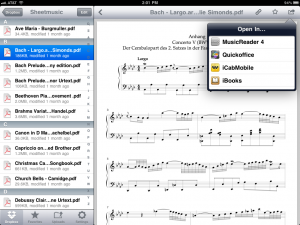 Dropbox integrates with iPhone/iPad apps so you can open and edit your files in those apps.

Head into the App Store, search for Dropbox, install the app and then sign in using your Dropbox account. Voilà! All the files in your Dropbox are instantly available. Note that, unlike when you sync files between your computers, the Dropbox files are not stored on your iPhone or iPad—you’d quickly run out of space if things worked that way. Instead, you can see a listing of all your shared files and folders, open a chosen file and, if needed, save or open that file using one of your installed apps.

Some of these apps register themselves with the Dropbox app, so you can open a document in Dropbox, then tap the Action button and choose Open With… and choose from a list of registered apps in which to open the document. For example, if you have a Microsoft Word document in your Dropbox, you can use the Open With option in Dropbox to open it in, say, QuickOffice, for editing.

Other apps let you log into your Dropbox account and thus use Dropbox as a remote or local file storage resource.